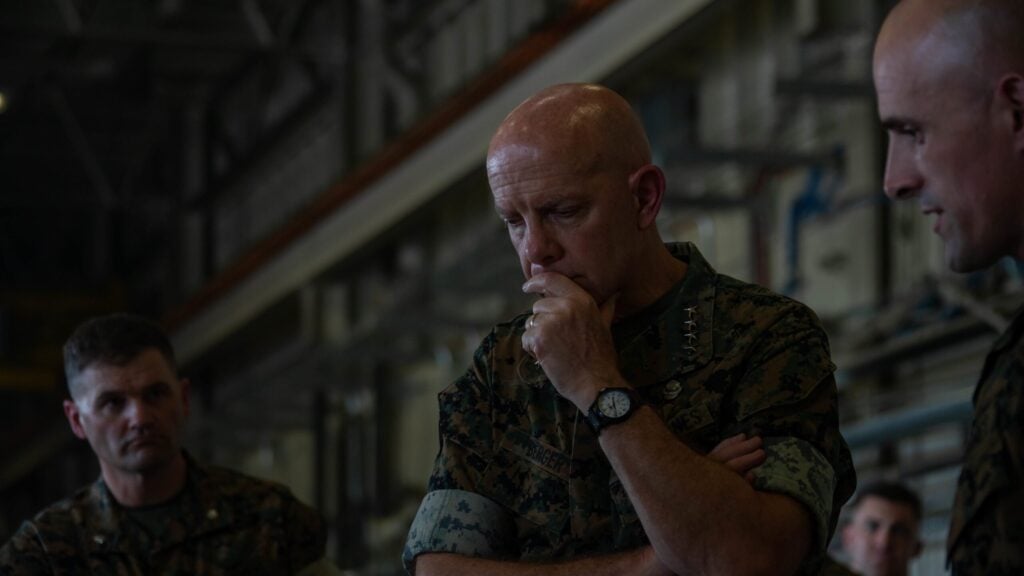 Perhaps no current Pentagon leader has sparked more passion than Marine Commander General David Berger and his plan to overhaul the Marines, which elicited significant and sometimes cutting comments from retired officers. In this analysis, David E. Johnson of the RAND Corporation calls for peace in the Body, before it is too late.

There is an ongoing war for the future of the Marine Corps.

On one side is the Commandant of the Marine Corps, General David H. Berger. In opposition is a large organized group of retired Marine generals. The war ended with Berger’s decision to redesign the Corps to function as a complement to the Navy, focusing primarily on anti-shipping operations against China.

But if this conflict continues, it threatens to be destructive to the very fabric of the Corps – bad for the Marines and worse for our country. And although both parties have a passionate sense of doing what is best for the service, this conflict must be stopped, immediately, before irreparable damage is done.

Berger first announced his intention to reform the Corps in his Commander’s Directives [PDF] when he took office in July 2019. He also made clear that force design was his “number one priority”.

The document caused little disruption at the time, given that it was, in Berger’s words, “a roadmap.” Surely this was a vision statement and not an edict, and the actual implementation would be rigorously debated within the Marine Corps family?

Those who thought that was what Berger was talking about were wrong. The real war began with the release of Force Design 2030 in March 2020. Berger’s destination became clear, as did the parts of the Marine Corps no longer invited on the trip. He set in motion plans for a radical overhaul of the Corps to meet the strategic imperative of China’s rise; a mission for which he was convinced the Marines were unprepared.

Berger dictated that the Corps would “revert to our historic role in the seaboard.” He also determined that the current Corps had significant capability gaps that were needed to execute this mission. To fill these gaps, he asked the Corps to get rid of all its tanks and drastically reduce the current difficult-to-deploy systems, for example field artillery. These legacy systems will be replaced by missile-equipped forces that will engage the Chinese Navy from scattered and hard-to-find locations.

The Corps is also radically reorganizing its existing structure into Marine Littoral Regiments (MLRs). It will be a naval formation, organized around an infantry battalion and anti-ship missile batteries.

Berger and his supporters also argue that the reinvented body can still perform its traditional missions as efficiently as before. If needed, he will get tanks and other abilities from other services. But at the end of the day, the MLR isn’t your father’s Marine regiment – and an older generation of Marines isn’t happy.

Force Design 2030 had an unintended consequence that the commander probably didn’t foresee. It sparked a revolt by many retired generals. Ironically, Berger’s initiatives have been generally welcomed by many defense analysts and policy makers outside the Marine family. They welcome that at least the Marines, unlike other services, are doing something about China.

The point of view of the unprecedented revolt

The dissenters’ gloves fell off in a recent series of articles. That a large group of retired Marines publicly opposed a commander’s decision is unheard of in Corps history. Naval officers are best known for their loyalty to the Corps. Semper Fidelis — Always Faithful — is more than a motto; It’s a way of life.

Perhaps the most notable opening salvo from the opposition was the March comment in The Wall Street Journal by former senator and naval officer Jim Webb. Its title is the de facto manifesto of the dissidents: “Momentous Changes in the US Marine Corps’ Force Organization Deserve Debate”.

Webb also wrote that the agonizing decision to go public only came “after several failed attempts by retired senior officers to engage in silent dialogue with General Berger” and that the commander did not respond to a non-public letter of concern signed by 22 four-star retirees. Naval Generals.

The fact that the dissidents believed they should take their grievances outside the family shows how seriously they take the issues to be resolved. Webb captures their angst quite eloquently: “Traditional deference has been replaced by a sense of duty to the Marine Corps and its vital role in our national security.”

Retired Lt. Gen. Paul Van Riper also weighed in, writing that Berger’s plan was “for one type of conflict only, despite claims to the contrary: a naval war with China.” Therefore, he and the other dissenters argue that the Corps will be less able, if not unable, to execute what it has done so well in the past: global combined arms operations. It will also, he says, cripple the Corps’ ability to serve as a US emergency force.

Tim Barrick’s “On Future Wars and the Marine Corps,” written in defense of Berger’s moves, actually reveals a number of reasons why the commander may have encountered such strong resistance to his initiatives. First, Force Design 2030 was developed over two months in a “veil of secrecy” by “a small group of colonels and generals”, noting that “tough trade-off choices were needed and a sense of urgency regarding China prevailed”. Second, only the commander’s alternative was evaluated.

Here are the central questions for the dissidents: a small group, handpicked by the commander, set out to validate General Berger’s idea of ​​a single institution change without rigorous analysis of the alternatives or the possibility of an inclusive dialogue on this momentous decision .

Unfortunately, the tone of the clash will likely get even more heated with a Force Design 2030 update. [PDF] now in the streets.

Therefore, it is time to call a truce.

Both sides have valid points that should serve as a basis for dialogue. Berger’s critics are reacting to what they perceive as the commander’s ill-conceived quest to be relevant in the pivot to Asia with his almost exclusive focus on a naval conflict with China. And yet, Berger is keenly aware of the urgent need to address the significant challenges China poses to our national security.

There is a critical question that needs to be answered urgently: is the commander right to broadly reorient his service to support a naval fight against China, or a broader (and admittedly more traditional) approach to warfare? Future of the Corps More Appropriate?

And at the heart of the split in the service is this: Berger, good or bad in his assumptions, hasn’t made the outreach that’s traditionally expected. A radical change of this profound nature should be professionally debated and analyzed in depth, and not imposed by decree. Granted, good ideas often die a lingering death at the Pentagon. At some point, a department head must lead and do what is necessary to move forward quickly. But there is a useful middle ground between fiat and obstruction that still needs to be plowed with Force Design 2030.

Berger, although he had listening sessions with several of the dissident generals, apparently ignored their recommendations. Whether we like it or not, these retired officers are part of his constituency and they have helped build the magnificent Corps he inherited. Their advice should be carefully considered.

The stakes are extremely high. It is not a decision without consequence, like the October 2000 decision of the then Army Chief of Staff, General Eric Shinseki, when he ordered the adoption of the black beret in the whole army and unleashed a fury. Nor is Force Design 2030 a “New Coke” type fiasco. Berger’s decision is extremely consequential. It decides the future capabilities of an important service to contribute to our national defense, not what kind of headgear Marines will wear or which sodas Americans will like.

Even a retired former Army colonel like me, though I hate to admit it, realizes that our country needs a strong and relevant Marine Corps. It’s time for the Marine family to sit down to sort this all out and get the Corps back on track.

David E. Johnson, Ph.D., is a retired Army colonel. He is a senior fellow at the nonprofit, nonpartisan RAND Corporation and an adjunct fellow at the Modern War Institute at West Point. From 2012 to 2014, he founded and led the Army Strategic Studies Group Chief of Staff for General Raymond T. Odierno.