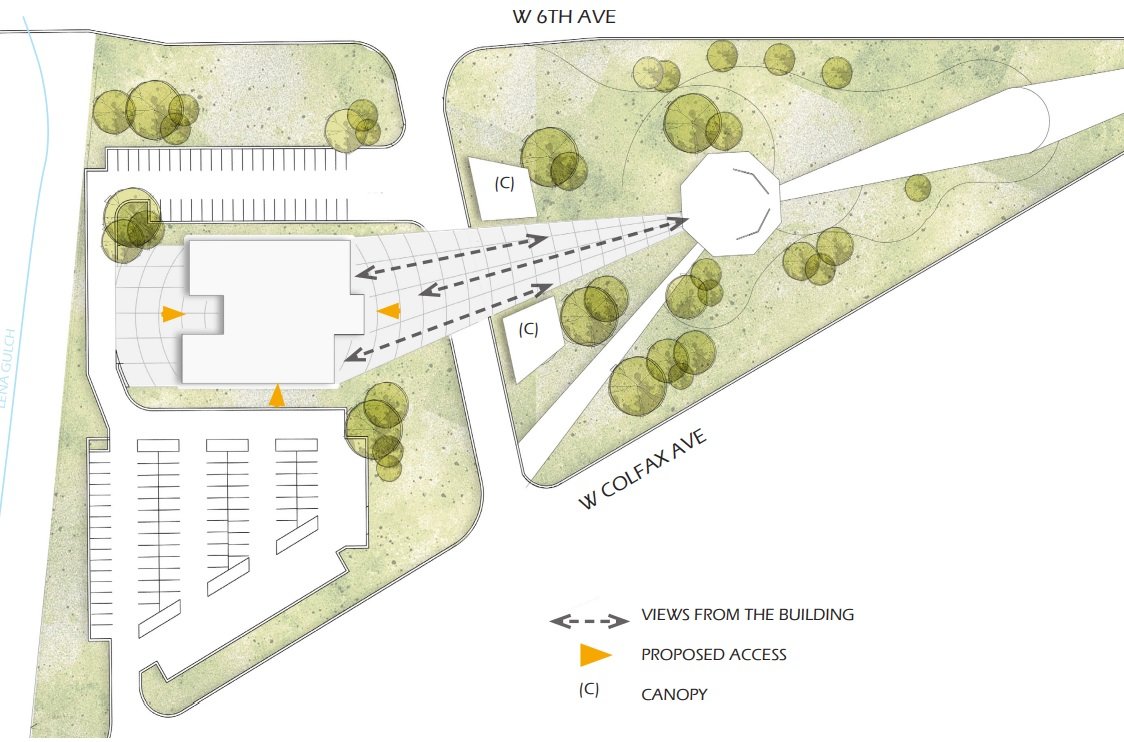 The US Marine Corps Memorial Foundation is seeking to remodel the memorial wedged between US Highway 6 and West Colfax Avenue in southeast Golden. It also hopes to acquire the adjacent property from the Colorado Department of Transportation to build event space and parking.

To that end, foundation management has asked Jeffco commissioners and staff for a letter of general support and assistance in navigating discussions with CDOT.

The memorial, inaugurated in 1977, is the only one of its kind in the United States. While the memorial sits on the CDOT right-of-way, the foundation has an agreement to use the land in perpetuity, its board members told Jeffco commissioners Aug. 2.

Paula Sarlls, a USMC veteran and president of the foundation, described how the memorial contains much symbolism and history that is “near and dear to Marines everywhere and to all service members.”

“When my husband and I first went (to the memorial)…it was the first time we felt welcome at home,” she said.

Phase I will consist of remodeling the current memorial, and Phase II includes acquiring the adjoining property of the CDOT maintenance facility to house an event center/multi-purpose building and parking lot.

Sarlls and his team said the building would be used to host various events for veterans, active service members and the public. The space could also be used to provide advice to veterans and service members, or at least could be a way to connect them to these resources, they described.

Depending on the design used for the event space and parking lot, estimates range from $7 million to nearly $12 million. According to the foundation’s website, it still needs at least $3.5 million in donations to remodel and expand the site as planned.

Tim Dunn, the foundation’s treasurer, said potential donors were interested in the expansion project on the adjacent property. During preliminary discussions, CDOT supported phase I but was not formally approached about phase II.

He raised the possibility of Jeffco facilitating a land swap between CDOT. Sarlls later clarified in a letter to the commissioners that this was only an idea, not an official request.

“We understand that CDOT leaving the property may involve the relocation of its maintenance facility,” Sarlls wrote to the commissioners in an Aug. 4 letter. “If and when this happens, any guidance/assistance from the county in this effort would also be appreciated.”

Overall, Dunn, Sarlls and their colleagues said Jeffco’s expertise in discussing and eventually negotiating with CDOT will be invaluable to the success of Phase II.

“We want to ask for your support and partnership in acquiring the (CDOT) property,” Dunn said, speaking to commissioners and Jeffco staff Aug. 2. “…(Donors) were very interested in helping us financially to enter this area. . We have been encouraged by this, but at the same time we need help with navigation.

While the commissioners were strongly in favor of drafting a letter of support for the entire project, commissioner Tracy Kraft-Tharp felt it was too early to secure a land swap. However, she and her colleagues agreed that Jeffco staff could explore the possibilities and engage in conversations.

Commissioner Lesley Dahlkemper, whose husband is a USMC veteran, said she’s really excited about the project and what it means for Jeffco and Colorado.

“I didn’t realize it was the only nationally recognized Marine Corps memorial (in the United States),” she continued. “What a real treasure to have in our community.”