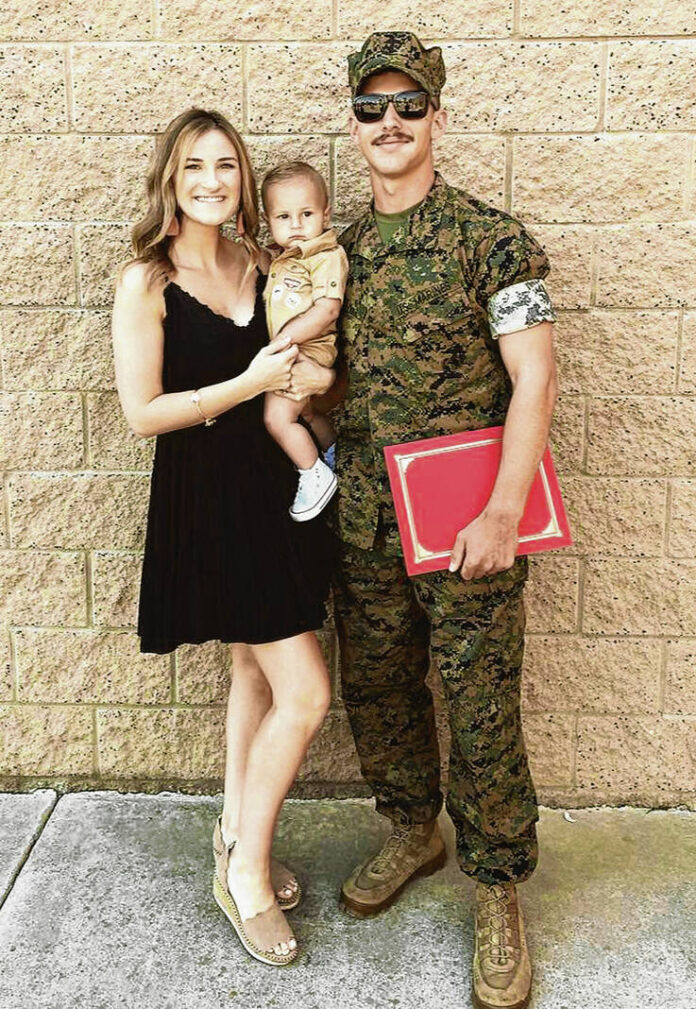 Being a military spouse is tough.

After getting married on July 1, 2019, Sarah and Gus Hogan moved to California so he could continue his service in the US Marine Corps.

The following week, Gus was away training, so Sarah was home alone, didn’t know anyone, and was over 2,000 miles from her hometown of Brownstown.

“At first I was just super excited because I was like, ‘Oh, I can live in Southern California, the beach, good expectations,'” Sarah said. “We went out, moved and settled in. … I think it kind of hit me, like, ‘OK, it’s not like a vacation or all that fun and games.’ »

She got a puppy in hopes that she wouldn’t feel so alone, but she still struggled to adjust to a new way of life.

“It was tough because I didn’t really reach out to other military spouses at first, and I was just like, ‘Oh, that’s fine. It doesn’t matter,” Sarah said. “I stayed myself. It was not good.

In December of that year, she returned to Brownstown because Gus was undergoing training before his first deployment.

When she later returned to California, Sarah made it her business to become more involved in the military community. She joined Facebook groups, where she introduced herself and found friends with similar interests, and she also became very close friends with her neighbors, who became more like family.

It made a huge difference, Sarah said.

“It was like a big sigh of relief,” she said. “Now it’s good because I have all these people that I can at least call or text, and it’s good to know that you’re not alone. There are so many people in the same boat than you. I feel like it really helps you through a lot of hardship and stress because it’s like, ‘OK, these people do it too. These people before me did it, so I can get away with it too.

In August 2021, the Hogans’ son, Woodrow, was born. Now Gus is on his second deployment.

“I have the most supportive wife when it comes to this lifestyle, and I really appreciate how she handles all the stress of being a military wife and mom,” said Gus. “It’s very hard to leave her and my son, Woodrow, but knowing what a wonderful mother and wife she is makes it easier knowing that she will handle whatever comes to her at home.”

Gus and Sarah both graduated from Brownstown Central High School in 2018, and he went to boot camp in August.

“I have a long family history of being in the military,” Gus said. “Growing up, my uncle (dad’s brother) and my grandfather (mom’s dad) lived very close, so I was constantly around them. Grandfather served in Vietnam. My uncle served in the Marine Corps and often spoke about his time. I think that was what initially planted the seed of joining the Marine Corps at a very young age.

Additionally, his cousin, Hunter “HD” Hogan, joined the Marine Corps right out of high school in 2009, and Gus said he was a big influence on him and always looked up to him. Sadly, on June 23, 2012, HD was killed in Afghanistan.

“Since then, all I wanted to do was join the Marine Corps and fulfill my patriotic duty and serve,” Gus said.

Gus’ boot camp was at Marine Corps Recruit Depot San Diego for 13 weeks. From there he went to Marine Corps Base Camp Pendleton for basic infantry training for about eight weeks, then checked into his unit, 2nd Battalion, 5th Marine Regiment.

All along he was in the infantry. In the summer of 2020, he was deployed to Iraq and spent six months at the US Embassy in Baghdad.

Sarah said communication with her husband wasn’t too bad as there was only an eight hour time difference.

Where it is now, however, is a bigger time difference.

“When I wake up he goes to bed, and then when I go to bed he wakes up,” Sarah said.

Luckily, the military keeps her updated on what’s going on, which helps.

Currently a rifle squad leader with the rank of corporal, Gus said he will soon take over as sergeant.

“Hands down, the best part of being in the Marine Corps is the people you meet and work with on a daily basis,” he said. “Friendships and camaraderie are like no other. The best thing about being a grunt is the training opportunities we have, things that very few people get to experience.

Gus said it meant a lot to him to serve his country.

“Everything about me is very patriotic,” he said. “The idea of ​​America and the aspect of freedom that we represent as a country I take great pride in, and in serving I only do a very small part of trying to preserve the image that America has since the beginning of this great country.

On July 4 and every day, Gus declared that freedom and independence were everything to him.

“I look back on all the sacrifices that have been made by men and women from all walks of life to preserve what our country stands for,” he said. “I’m extremely proud to be an American and all that that represents.”

While Sarah said Gus can be very humble, she admires what he has done and continues to do in the military.

“His accomplishments in the military world are very significant and I am very proud of him for all that he has done,” she said. “He’s in charge of 12 or 13 people now, and so that’s a big thing. I’m super proud of him, and always have been, and I always like to brag about him.

Early in her life in California, Sarah ran an online store. Since having her first child, however, she has focused on being a stay-at-home mom and she also keeps busy with activities for service wives and children.

“They have meetups and programs and things,” Sarah said. “Some of our best friends, they have a son the same age as ours, so we hang out a lot.”

Sarah said serving in the military was a lifelong goal for Gus, so she doesn’t care about military life.

At this point, Gus said he didn’t know how long he would serve.

“For now, I still don’t know if I’m going to leave or stay and I haven’t really studied the field of the civil sector,” he said.