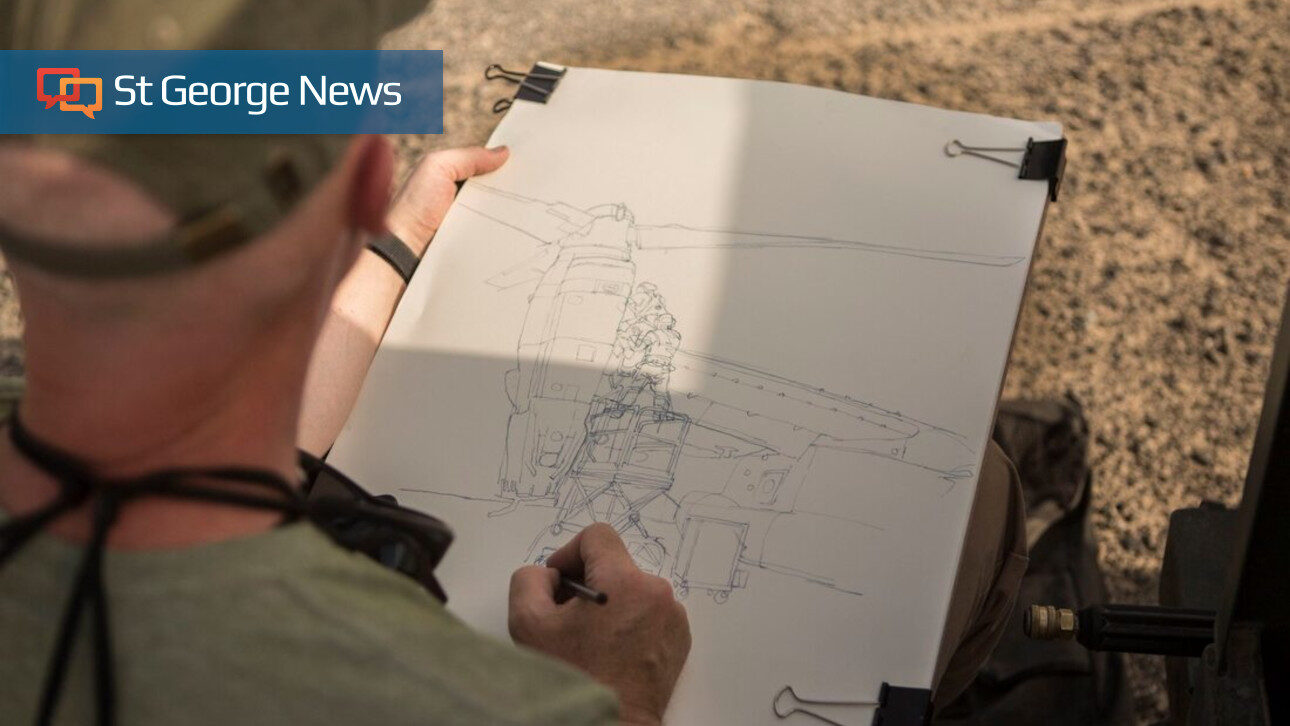 ST. GEORGE- Unless you put on the uniform, it’s hard to imagine the toll the fight can take on the men and women who serve this country.

While a picture is worth a thousand words, it is for this reason that many veterans turn to art to express the horror of war and the joy of peace.

The show includes 36 works by 15 combat artists, depicting Marine Corps service from the mid-1970s to the wars in Iraq and Afghanistan.

The Marine Corps Combat Art Program engages veterans along with their civilian counterparts who served while deployed overseas to document the Corps’ ongoing mission. The advice is simple: if you have served, chronicle your experience through art.

Stephanie Wheeler, curator of the St. George Museum, is pleased to be one of the few museums chosen to host the exhibition.

“We are very pleased to be one of eight US cities to host this traveling exhibit,” Wheeler said. “I can’t wait for the public to see what these Marines have done through their art…it’s amazing.”

At a time when America is divided, Wheeler added, it’s encouraging to see a glimmer of something positive.

“It’s a great way to pay tribute to people who served in the military and those who paid the ultimate sacrifice with their lives,” Wheeler said. “It’s a nice way to show our appreciation.”

The exhibit is divided into three themes: “Every Clime and Place,” which focuses on the nation’s combat readiness and ability to respond quickly to any location around the world; “No Better Friend, No Worse Enemy”, which describes the Marines’ flexibility in leading the fight against the enemy while providing aid to anyone in need; and the ending theme, “The Price”, tells the story of the sacrifice.

No Marine better characterizes what the combat art program stands for than Master Sgt. Elize McKelvey who served as an active duty Marine from May 2012 to October 2020.

During her time in uniform, McKelvey deployed with the 15th Marine Expeditionary Unit to Hawaii, but within a week she witnessed an Osprey crash that killed two Marines.

McKelvey used this event and his talent for art to connect with families and Marines from this event.

In 2016, McKelvey officially became part of the Marine Corps Combat Art Program as an enlisted representative.

McKelvey covered several missions in the Middle East and training exercises in the United States.

Recently, as a civilian, McKelvey drew Afghan refugees while embedded with Marines overseas. Although he no longer wears the uniform, McKelvey’s passion for sharing stories through art remains a constant motivation to represent the work of the United States veteran community.

“Marine Corps art is up close and personal. It is about the individual Marine – in combat, during training, or when providing assistance in times of dire need,” said Lin Ezell, former director of the National Marine Corps Museum and curator of the traveling exhibit “This art helps us better appreciate those who served in uniform and those who continue to serve today.”

According to the exhibit’s sponsors, the canvas works and sculptures provide a window into the experiences of the artists, many of whom lived through combat. The result is a rich commentary on the men and women of the Marine Corps who defend the Constitution of the United States.

The Marine Corps combat arts program dates back to 1942.

Its mission is to keep Americans informed about what “their Marines” are doing at home and abroad. Managed today by the National Museum of the Marine Corps, the collection has grown to include more than 9,000 works of art created by more than 300 artists.

Honor, courage and commitment are the core principles embraced by all Marines. With a dose of gritty realism, the principles are reflected in the combat art collection.

Talented active duty Marines, reservists and civilian artists document life in the Corps, whether on the front lines, during training exercises, during humanitarian missions or on the home front, the strength of the collection rests on the authentic and unvarnished focus that these works have on the human condition in the most trying circumstances.

The exhibition will continue to travel until 2023.

The St. George Museum is open Tuesday through Saturday from 11 a.m. to 6 p.m. There are no fees; however, donations are appreciated.

David Louis hails from… well, everywhere. It’s hard to pinpoint a hometown for David, because when he was growing up, his father wanted to move somewhere else every couple of years. Since 1986, his primary residence has been Las Vegas, where he graduated from the University of Nevada. David has been a journalist for over 10 years, but as a jack-of-all-trades, he’s also served as a restaurant manager, warehouse foreman for a plumbing company, K-8 teacher, and limo driver. In addition to a previous life as a musician, David enjoys traveling on Amtrak – it’s all about the journey, not the destination – cooking and painting. Her greatest joys in life are her family, too large to list, and her cat Maxine.