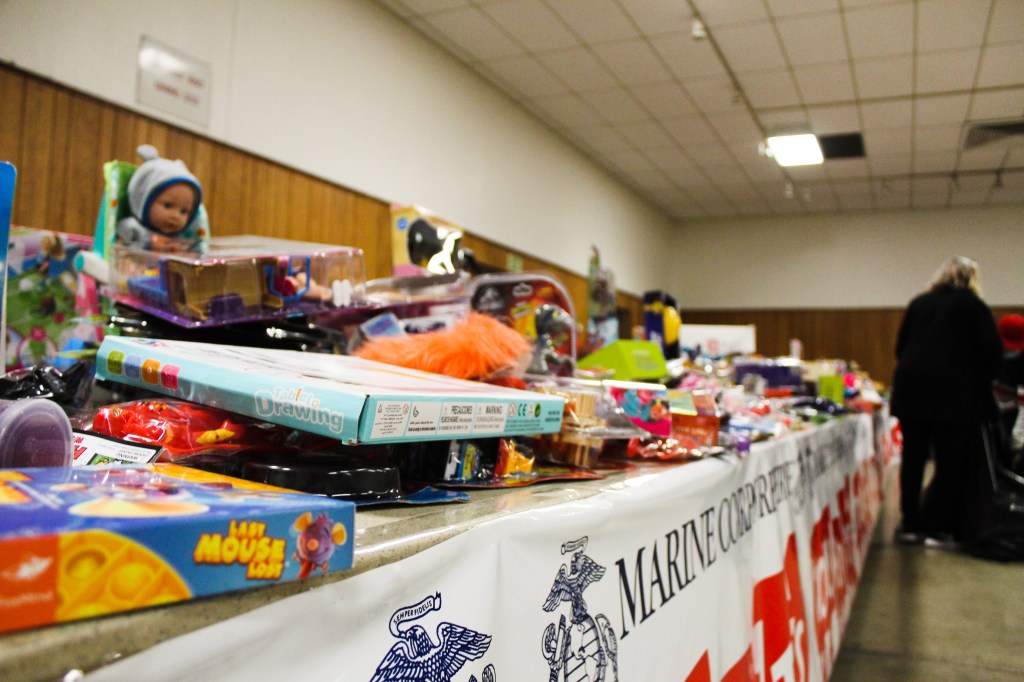 The Marine Corps League’s Toys for Tots giveaway distributed toys to 500 families on Saturday at the Yolo County Fairgrounds in Woodland.

Family registrations began in early November through the Yolo County Health and Human Services / Child Protective Agency with a limited number of vouchers due to difficult times and health restrictions, according to the Woodland’s Toys for Tots website.

Entry requirements included wearing a face mask, presentation of valid government-issued photo ID and proof of residency. The toys and gifts were intended for children ranging from newborns to 14 years old.

Tom Evans, the Toys for Tots coordinator, said Yolo County is an incredibly generous county, noting that there were around 230 toy drop-off sites and over 250 filled toy boxes this year.

“There’s just all this really goodwill from Yolo County and all these people who when they participate they contribute really well,” Evans said.

Evans said they were only able to hand out 500 vouchers this year – up from 1,000 before the pandemic – with each participating family being able to choose from thousands of donated toys.

“This year we have kept it at 500 because our membership is going down enough,” he said of the Marine Corps League.

He noted that the organization had lost thousands of dollars in funding due to the COVID-19 pandemic and also as a precaution newer variants like the omicron which made them uncertain of state health guidelines this month- this.

“Hopefully the next person who takes over can get a lot more help and can create up to 1,000 tickets,” Evans said.

Evans was coordinator for two years and was deputy coordinator for five years previously. He is stepping down from his post and noted that the number of members of the Marine Corps League detachment responsible for the event is declining as the members age.

“We are looking for a lot of young blood to take over and do everything for us,” he added.

Kalin Watkins attended the event with his son, Bradley Watkins, who is part of Boy Scout Troop 66 and volunteered for the event.

“I also volunteered when there were few volunteers and it has been really great for both of us to be here and help members of the community,” she said.

Kalin noted that while many gifts were given, most were intended for younger children, which meant that gifts for older children were more limited this year.

“The younger ones have received an abundance of donations so that families can choose five to six items per child while with the 12 to 14 year olds it is a bit more sparse, so they can only choose about one or two articles, ”she said. Explain. “We just chaperone customers around the room and help them shop. “

Bradley helped Carmen Rodriguez with shopping for her two children while translating from English to Spanish for her.

Rodriguez said events like these are great for children from low-income families as they give them the opportunity to have a great Christmas.

“It makes Christmas a pleasant day for them and makes them happy to be able to open presents,” she said in Spanish.

“I think we had maybe four Spanish speakers there,” Evans said of the event. “So people who didn’t speak English just had to wait for one of these guys to be available. This is really one of the things we need, they are Spanish speakers.

If you are interested in volunteering, sponsoring a donation, visit the Woodland’s Toys for Tots website for more information.