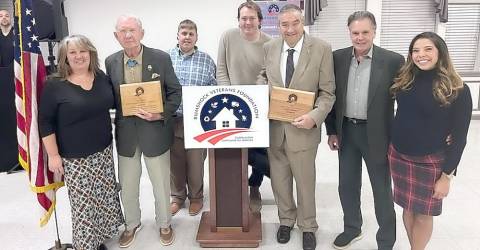 “This thing is emotional for me because it’s about caring for our brothers and sisters, who have worn the nation’s garb,” Livingston said. “And when you travel across the country and see organizations ready to care for those who have served and sacrificed, that’s the American spirit, the America we’ve all dreamed of living in.”

According to recent research provided by the Veterans Administration, more veterans are killed by suicide than in combat, which is one of the reasons Rumshock launched its program in Orange County. . The need for affordable housing, jobs, and mental health care are other issues Rumshock is trying to address.

Rumshock Veterans Foundation, a 501(c)(3) nonprofit organization founded in February 2019 to provide service members with after-service support, was awarded $400,000 which was secured and announced by the State Senator of New York Jen Metzger in 2020. This funding will go towards the purchase of land and eventual construction in Port Jervis for one of the first affordable veterans housing projects in Orange County.

Rumshock’s program, a collaborative community run by village residents, will include employment, transportation to help village residents get to health care providers and other necessities, and canine companionship for the emotional support needed.

According to the Department of Defense, Livingston has become a trusted commander in his more than three decades of service. He learned leadership skills early in his career and put them to use in 1968 when he helped liberate a Vietnamese village and rescue stranded Marines. For this he was awarded the Medal of Honor. His story is commemorated in the book, Noble Warrior, published by Zenith Press.

To learn more about Rumshock’s efforts and to donate to his efforts to help Orange County veterans, click Rumshockvf.org.

Rumshock’s program, a collaborative community run by village residents, will include employment, transportation to help village residents get to health care providers and other necessities, and canine companionship for the emotional support needed.