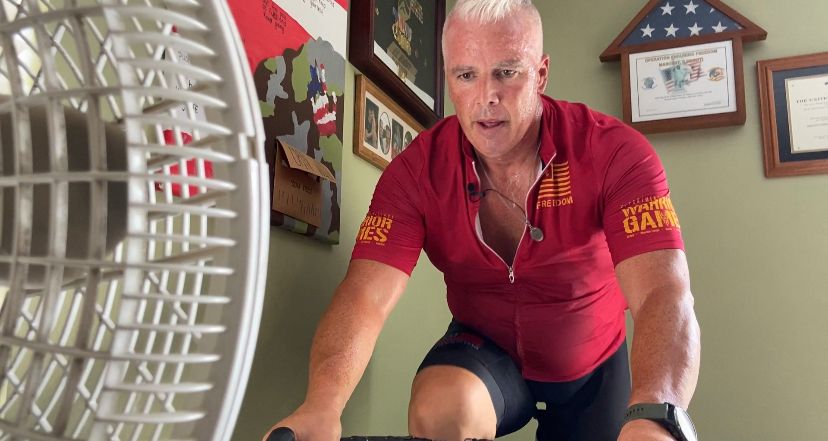 PALM BAY, Fla. — The 2022 Warrior Games are taking place this weekend in Central Florida at Disney’s ESPN Wide World of Sports, with opening ceremonies scheduled for tonight, and a veteran says he’s aiming for the ‘gold.

However, preparing for the race can sometimes be the hardest part of racing.

What do you want to know

“As Marines, we never want to lose,” Blackburn said.

Once he’s on the bike, it’s a feeling of freedom.

That’s why he spends at least three days a week pedaling.

“The shortest route is around an hour and 15 minutes, and the longest route would be around three hours,” Blackburn said.

Sixteen years ago, this was not the case.

“I needed that help to just put a sock on my foot or a shoe. I couldn’t reach it,” he said.

In 2006, Blackburn was touring Iraq when her life changed in an instant.

“We were three weeks away from going home,” he said. “I had my team on foot patrol, and a sniper shot me.”

A shot from behind blew his front hip and caused permanent damage.

“I don’t have a butt on this side. Let’s go. There’s a metal bar from here to here,” Blackburn said. “I had a full hip replacement. It took four surgeries and about five years.

This fact makes his training program even more impressive.

“I spent over a year learning to walk again,” he said. “To think that I could go back to cycling with a big goal, but to come back and be competitive was just a dream. I couldn’t do it myself.

Her support system helped make that dream a reality.

“The days when we’re not happy, we reach into this little pocket here, open up some motivation – some quotes my daughter had made for me,” Blackburn said.

And after each outing, he thinks back to his career.

“All the other things you’ve done and the accolades you’ve achieved, but here’s what you’re doing it for — my wife, my son and my daughter,” Blackburn said.

He continues to push back the hard days, thanks to the people and the spirit of the Marine Corps.

“What this teaches you is that you can do a lot more than you think you can,” Blackburn said. “Your mind is telling you to stop, but the Marines teach you that you can ignore that. It’s still there. It’s not like the pain doesn’t happen, but you can push yourself way beyond that. your mind tells you. You can.”