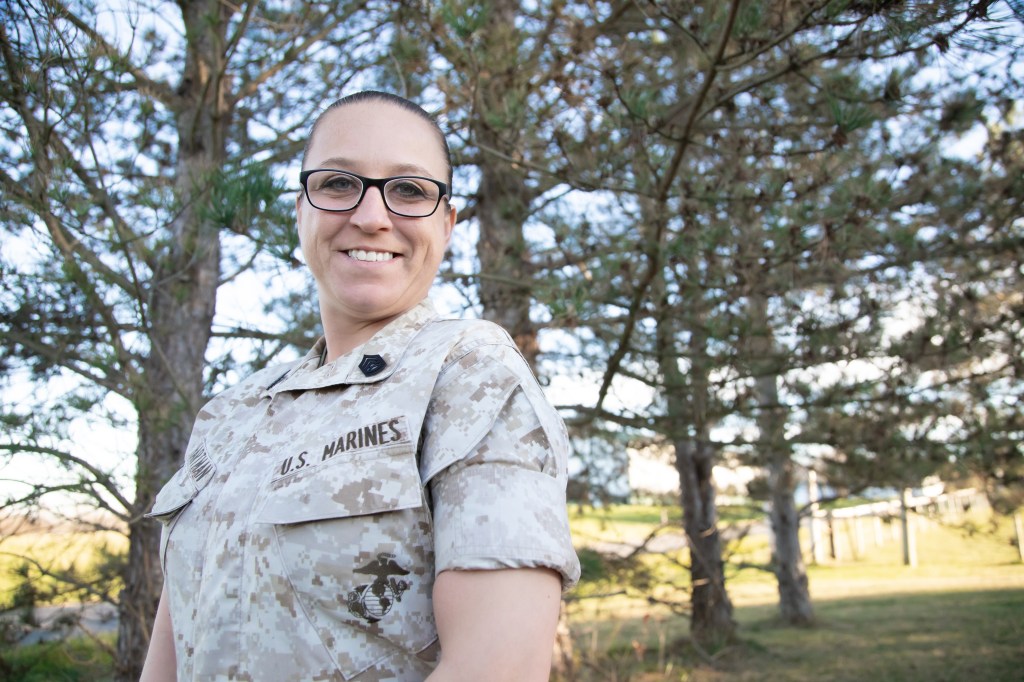 Samantha Hartman left for Marine Corps boot camp an hour after graduating from high school in 2001, still wearing her cap and dress.

The eldest of five children was raised by her single mother and says college fees were impractical at the time.

“It was either get a job and never live the life or join the military and see it all,” she says.

Hartman says his three-month training in Parris Island, SC, was a culture shock.

“The first 10 days was like walking around with two left feet; I didn’t know right from left. It was almost controlled chaos,” Hartman says.

Recalling a time when she felt weak, Hartman wondered if she had made the right choice. But she was determined to finish what she then started, and that persistence remained.

As she hoped, Hartman’s more than a decade in the Marine Corps took her around the world.

She has been deployed three times, once to Afghanistan and twice to Iraq.

Hartman says his last 14-month deployment to Iraq was his toughest.

“It was tough emotionally and mentally,” she says. “You miss all the holidays. It was almost as if time stopped when you left, even though your family continued.

After returning to the United States in 2008, Hartman re-enlisted and became a combat instructor at the North Carolina School of Infantry.

There she spent four years training new recruits and became the mentor she never had.

She felt a special pull to help other female recruits, who make up just 9% of Marines.

“I loved it, I loved impacting the junior Marines,” Hartman says, “I didn’t have those tips as I worked my way up.

“There aren’t many female Marines, so I really didn’t have anyone to look up to.”

Focus on family and a new future

In 2014, Hartman decided it was time to end his military career.

“My father fell ill and it was time for me to reunite with my family. That’s why I hung up my hat,” she said.

Hartman’s instinct to focus on family was well founded.

A year later, her father died of complications from diabetes.

And six months later, her mother died of cervical cancer.

“I’m glad I heard that voice say it was time to leave, otherwise I would have had regrets,” she says.

When she was ready, Hartman started thinking about the next chapter in her life.

But the Navy veteran felt like she was starting from scratch and says finding a job she loved was harder than she expected.

“I had all the experiences in the world, but I didn’t have a university degree,” she says.

That’s when Hartman, who was a new mother and working for the Transportation Security Administration at the time, became interested in the Associate of Applied Science in Lorain’s diagnostic medical ultrasound program. County Community College.

“Everyone I spoke to said LCCC was the best,” Hartman says. “I needed something that worked around my work and my child. And I wanted smaller classes, better teaching, and better resources.

Hartman contacted the LCCC’s Veterans and Military Service Center, where she met with Esperanza Correa, career and academic counselor, who guided Hartman through the application and admissions processes.

Three years after leaving the Navy, Hartman began completing the prerequisites for the LCCC ultrasound program.

As if the rigor of LCCC’s ultrasound program weren’t enough, the coronavirus-related government shutdown has put even more pressure on Hartman and his studies.

“I spent a month and a half without pay,” she says. “I said if I had to choose between putting gas in my car to come to class or putting food on the table for my daughter, I would choose food.”

In addition to relying on his local Veterans Affairs office, Hartman has found support through the LCCC Advocacy and Resource Center, which helps students succeed in the classroom by breaking down barriers outside of the classroom. classroom.

With gas cards covering expenses for her commute, Hartman could focus on the growing class workload as she progressed through the program.

Each semester she took 12-14 credit hours and towards the end supplemented her schedule with clinical experience.

Hartman says whenever she felt like it was too much, Correa was there to remind her of what she was capable of.

“Espy was always calling me and emailing me encouragingly, saying, ‘You get it; you can do this,’ and I needed that,” she recalled.

Correa’s inspiration increased when Hartman learned she had breast cancer and – just before surgery to remove the cancer – that she was pregnant with her second child.

Hartman’s instructors asked her if she wanted to take a semester off.

But as always, she was determined to finish.

Surrounded by support, Hartman was successful and graduated in 2021.

And, because Correa’s sweet incentive doesn’t always end with graduation, Hartman plans to continue his education through the LCCC University Partnership.