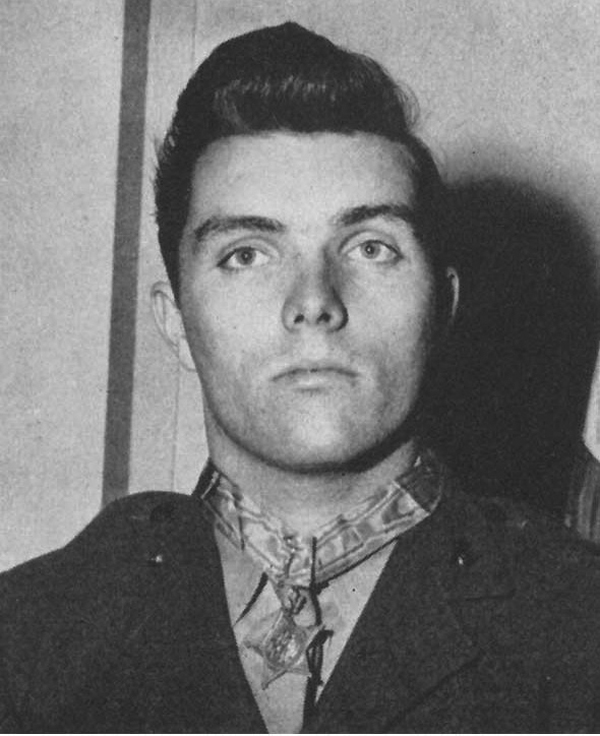 Marine Corps Maj. Douglas Thomas Jacobson was one of more than two dozen men whose bravery earned him the Medal of Honor on Iwo Jima.

The five-week fight on the tiny Pacific island was the Marines’ bloodiest battle of World War II, and Jacobson played a major role in winning a crucial part of that fight.
Jacobson was born November 25, 1925, in Rochester, NY, but moved with his parents to Port Washington on Long Island when he was still a baby. He was an only child.

Jacobson attended high school, but left before graduating to work as a draftsman for his father, Hans, who was a carpenter. He also worked as a lifeguard.

In 1942, World War II was raging and he wanted to serve. Jacobson enlisted in the Marine Corps Reserve in January 1943 at the age of 17.

In December 1943, Jacobson was an active duty private first class who had transferred to the Pacific war zone as part of the 3rd Battalion, 23rd Marine Regiment, 4th Marine Division. He spent the next year fighting in campaigns in the Marshall and Mariana Islands. But the greatest fight of his life – and that of many Marines – was yet to come.

On February 19, Jacobson and about 70,000 other Marines landed on tiny Iwo Jima, an 8-square-mile island made of volcanic ash. Iwo Jima was crucial to the Allies because its airfields were needed to bring American bombers within striking range of the Japanese mainland. Once the fight started, it didn’t stop for over a month.

On February 26, 1945, Jacobson’s Company I was called in to attack the Japanese defenses on Hill 382, ​​the highest point north of Mount Suribachi which was used for field artillery and anti-tank positions. According to its Medal of Honor citation, it was the core of Japan’s inter-island defense.

When the company anti-tank missile gunner was killed, Jacobson grabbed the man’s bazooka and destroyed an enemy 20mm anti-aircraft gun and crew. The bazooka was a weapon intended for use by two people, but Jacobson managed to use it with deadly accuracy on his own when his platoon was pinned down by heavy enemy fire. He destroyed two enemy machine gun positions, neutralized a large observation fortification called a blockhouse, then he eliminated the five-man crew from a pillbox before blowing up the bunker.

Jacobson continued up the hill, wiping out a hidden gun emplacement. When he realized that there was a group of similar locations near him constituting the perimeter of the enemy defenses, he continued to advance anyway. He was able to eliminate all six guns and 10 enemy fighters, allowing the Allied forces to take control of the position.

Jacobson wasn’t done, however. He was determined to widen the Allied breach of the Japanese defences, so he volunteered to help an adjacent assault company. He neutralized a pillbox that had pinned down the company, then he opened fire on an enemy tank that had rained gunfire on an allied tank. Jacobson then smashed the enemy tank’s turret and single-handedly overpowered another blockhouse.

With his fearless actions, Jacobson destroyed 16 enemy positions and eliminated around 75 enemy combatants. Hill 382 was finally captured by the allies after four days, and Jacobson’s efforts were a vital contribution to this victory.

The Battle of Iwo Jima did not end until May 26, 1945, and was the bloodiest in Marine Corps history. In addition to Jacobson, 26 other Marines and Sailors earned the nation’s highest honor for bravery for their actions.

After Iwo Jima, Jacobson was promoted to corporal. When the war ended a few months later, he returned to the United States and was posted to Marine Corps Headquarters in Washington, DC.

He received the Medal of Honor on October 5, 1945 from President Harry S. Truman during a ceremony at the White House. Thirteen other men received the award that day, including fellow Marines Cpl. Hershel Williams and Lt. Col. Gregory Boyington.

Jacobson was discharged from the Marines in December 1945 but re-enlisted the following April. He was again discharged in 1949 and spent a few years as a civilian before rejoining again in 1953. At this time he went to officer candidate school to earn his commission, which he received in March 1954.

Jacobson was assigned to Camp Pendleton, California, before being sent to Japan, where he commanded a company of the 9th Marines. He met his wife, Joan, while he was there. According to a 2000 article in the Newsday newspaper of Melville, NY, she worked for the Department of Defense in Okinawa as a schoolteacher. They married in 1962 and had three daughters.

When the couple returned to the United States, Jacobson spent several years serving at Camp LeJeune, North Carolina. He returned to Okinawa for a stint before retiring from LeJeune as a major in 1967. Before doing so, however, he took another step: he earned the high school diploma he never got. never got as a teenager.

Jacobson lived in New Jersey and sold real estate for many years before moving his family to Florida in 1987. His wife said he rarely spoke about the war unless someone asked him questions. on this subject. However, in recent years he has spent time speaking with schools and veterans groups, and he has remained active in the veterans community.

Jacobson died on August 20, 2000, at a hospital in Port Charlotte, Florida, not far from his home in North Port. He was buried in Arlington National Cemetery.

In his honor, the Douglas T. Jacobson State Veterans’ Nursing Home in Port Charlotte was named in his honor.