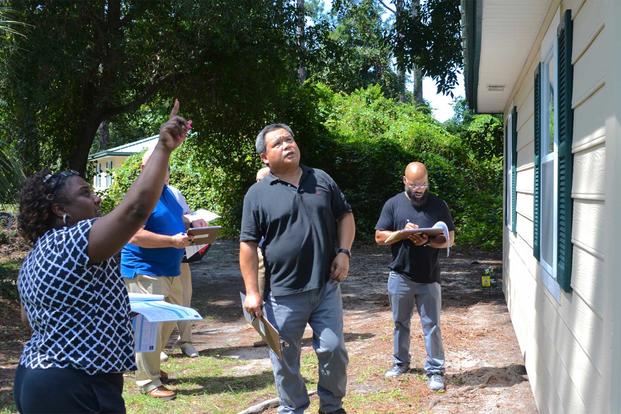 The Navy and Marine Corps have begun conducting health and safety inspections of more than 62,000 base homes, a move that will help the services meet the requirements of the Defense Policy Act of 2020.

The inspections, which will be conducted by an independent contractor, began last October for the Navy and Jan. 18 for the Marine Corps. They will be finished by October, according to the services.

So far, the Marine Corps and Navy have conducted housing inspections upon request, while the Army and Air Force have pledged to review 100% of their public-private, or PPV, project. housing stock, following a 2019 scandal over health and safety conditions in military homes highlighted by Reuters.

As part of the Navy and Marine Corps review, third-party inspectors will examine home interiors and exteriors, heating and cooling systems, drainage, landscaping, and more. If a health or safety issue is found, the inspector should report it to the military housing office, which will notify the private homes management company to resolve the issue, according to a Marine Corps press release issued Jan. 14.

The Reuters series, ‘Ambushed at Home’, revealed issues such as lead contamination in older homes and shoddy construction and maintenance in newer homes, including faulty wiring and intrusion. moisture, mold and vermin infestations.

In response, the Department of Defense has developed a Tenant’s Bill of Rights for service members who live in military housing, while the services have engaged in varying degrees of oversight and inspections.

The Navy and Marine Corps pledged to contact their members and inquire about their housing, but stressed that inspectors would only enter homes upon request, out of respect for sailors, Marines and their families.

“We cannot invade the privacy of their property without their permission,” Gen. Robert Neller, then commandant of the Marine Corps, told the Senate Armed Services Committee on March 7, 2019.

“Yes [Marines] refuse, which is their prerogative, we would ask to be able to question them by telephone on the state of their property. If they refuse, we will try to provide information such as “Do you have these phone numbers”. Here is the process,” Neller said.

The 2020 Defense Bill overturned these guidelines. Under the law, all departments had to have a third party — not a federal employee or a worker for private management companies — inspect homes starting Feb. 1, 2021, with a report filed in Congress by March 1, 2021, according to the language of the law. It is not known if the deadline was scheduled for March 2022.

As part of this effort, housing management offices will notify tenants two to three weeks before the scheduled inspection and then remind them again 48 hours in advance.

Inspections are conducted by Jacobs/HDR JV and will be signed off by a certified inspector, with information shared with command, respective departments, and possibly Congress, depending on the departments.

“The Marine Corps understands that your home is your refuge. … It’s a way to better support our warfighters. … With the information gathered from these home inspections, we can make decisions that will better support you. , you, your family, and your community moving forward,” Lt. Col. Kenric Stevenson, deputy director of housing at Marine Corps Installations Command, said in a video message to Marines.

The Army launched its third-party housing inspections in January 2021, aiming to complete its reviews by September 2021. The Air Force did not provide an update on its program per post.

The inspections are unrelated to the ongoing water crisis at Joint Base Pearl Harbor-Hickam, Hawaii, Marine Corps officials said in a statement emailed to Military.com.

The Army announced Tuesday that it plans to increase the professionalism of its housing management personnel by offering two new certification programs. According to an Army press release, training to obtain professional credentials will cover budgeting and contracting, customer service, conflict resolution, fair housing, housing inspections and more. .

Related: Here’s how each service is tackling poor housing conditions on military bases

© Copyright 2022 Military.com. All rights reserved. This material may not be published, broadcast, rewritten or redistributed.