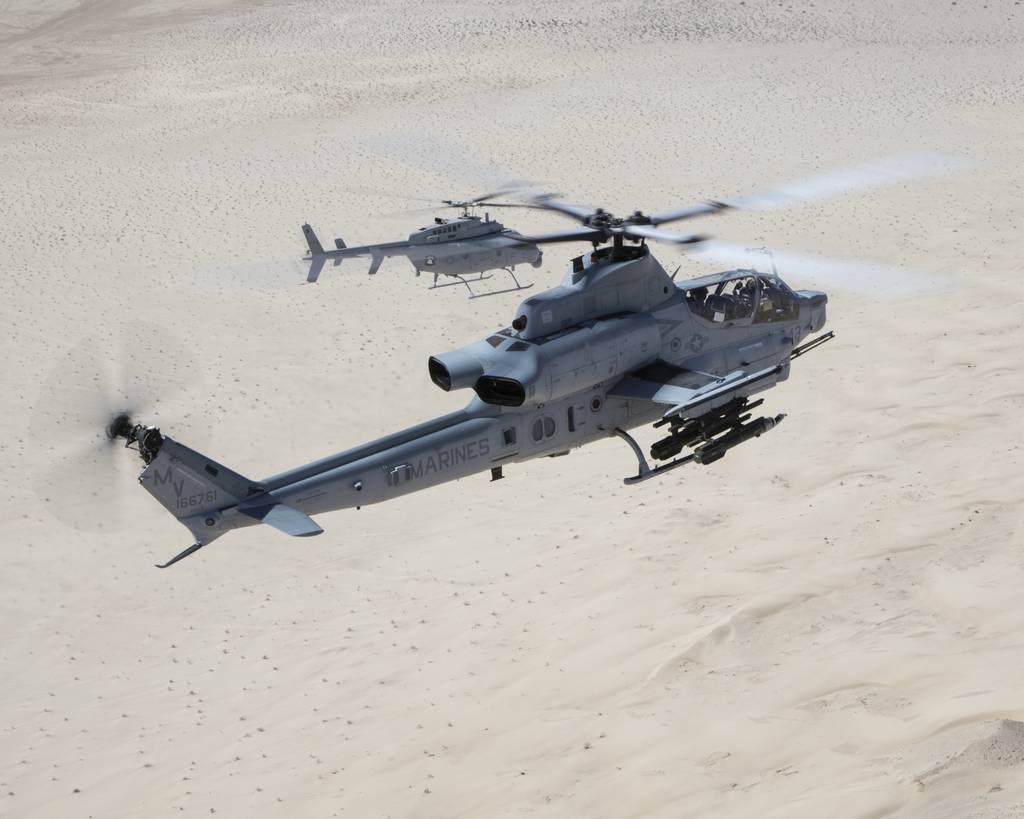 WASHINGTON — The U.S. Navy and Marine Corps demonstrated a manned-unmanned naval team capability during an exercise in California, showing how their tactics and equipment could combine in the future to fight in a littoral environment .

UH-1Y Venom and AH-1Z Viper helicopters from Marine Operational Test and Evaluation Squadron One (VMX-1) carried out attacks during the March 10 exercise, while an MQ-8C Unmanned Aerial Vehicle Fire Scout from the Navy’s Helicopter Sea Combat Squadron 23 ( HSC-23) helped find the targets. Marines and sailors coordinated the strike from the Fire Scout ground control station, according to a Marine Corps press release.

“This opportunity promotes greater familiarization and development of the manned-unmanned team concept that builds confidence and efficiency across the Blue-Green team,” said VMX-1 Commander Col. Byron Sullivan in the press release. He added that the Commandant of the Marine Corps and the Chief of Naval Operations had directed the Marine Services to “embrace the future of warfare and make it our advantage on the battlefield.”

During the exercise at Naval Air Facility El Centro, Calif., the naval team honed their ability to plan, communicate and coordinate fires between manned and unmanned rotary-wing aircraft.

The Navy partners its Fire Scout with its fleet of MH-60 helicopters, with the same squadron operating and maintaining the manned and unmanned helicopters. Pilots can fly the MH-60 one day and control a Fire Scout from the console the next.

To this day, the Marine Corps uses smaller UAVs to aid its ground forces, and its larger drones fall under separate unmanned aviation squadrons. This exercise represents a tighter integration between manned and unmanned aeronautical assets than the service typically sees.

The Marine Corps plans to deploy small units to scattered locations around island chains and littoral regions as part of its Expeditionary Advanced Base Operations concept.

The navy also plans to conduct distributed maritime operations, with littoral combat ships part of this ability to deploy the force in new locations that were previously not accessible to larger warships. LCS are the primary employers of the Fire Scout, as part of the LCS surface warfare mission set – meaning it’s possible that Marine units will find themselves able to take advantage of a Fire Scout at proximity, if the two services can work out the tactics and the technology in advance.

“Adversaries are going to be faced with a dilemma as we bolster our naval expeditionary force by leveraging unmanned systems to complement our rotary wing,” said Major Ben Henry, VMX-1 science and technology manager. , in the press release.

Megan Eckstein is a naval warfare reporter at Defense News. She has covered military news since 2009, with a focus on US Navy and Marine Corps operations, acquisition programs and budgets. She has reported on four geographic fleets and is happiest when recording stories from a ship. Megan is an alumnus of the University of Maryland.