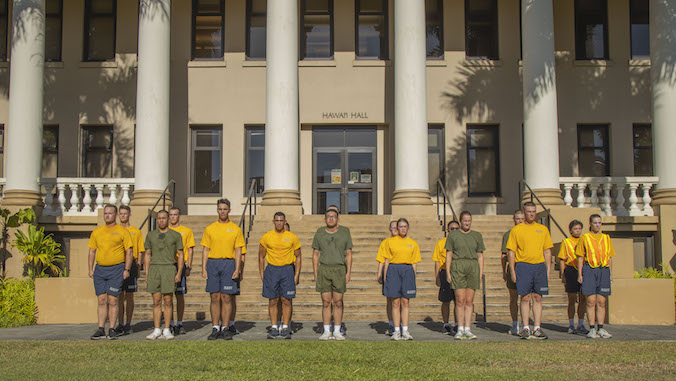 The University of Hawaii at the Naval Reserve Officers Training Corps in Mānoa (NROTC) enters its second year with a new cohort and adds a Marine Corps unit to the program. In addition to its Navy unit, the program will now select and accept Navy officer candidates.

“Stand up on uh Marine NROTC unit with a team eager to help and an island full of service members was nothing short of a team effort,” said Jenkins, who will serve as the Marine Corps instructor. “The unit is in its infancy, but has received resounding assistance from Marine Corps Pacific Fleet, Marine Corps Base Hawaii and Commander Pacific Fleet.

NROTCNew members were introduced to the program and took part in a series of activities: fitness testing and swim qualification, weapons handling, pistol familiarization range, close order exercise, introduction to the arts program Marine Corps Martials, one night stay aboard USS Missouri– and attended the Kaneohe Bay Air Show, where they interacted with Navy and Marine Corps officers and watched the performance of the Navy Blue Angels.

The students completed their orientation by moving into their residence halls to kick off their first semester as college students.

Aspirants Bailey Gapusan says he enjoyed his experience during orientation and for what lies ahead. “My favorite part was the Marine Corps Martial Arts, especially ground fighting. I’m looking forward to being part of the first Marine Corps unit,” he said.

aspirant Jason Stevenson-Chupanywho joins the unit from the Navy, said: “I enjoyed meeting with the Marine Drill Instructors to learn the fundamentals, as well as our time aboard the USS Missouri. I am very excited for the leadership opportunities.

Besides adding the Marine Corps unit, uh Manoa’s NROTC just completed a two-month summer internship pilot program with the WE Pacific Fleet which provided Midshipmen with the opportunity to join Headquarters Command COMPACFLT as full personnel and exposed them to different roles and responsibilities of Navy occupational specialties.