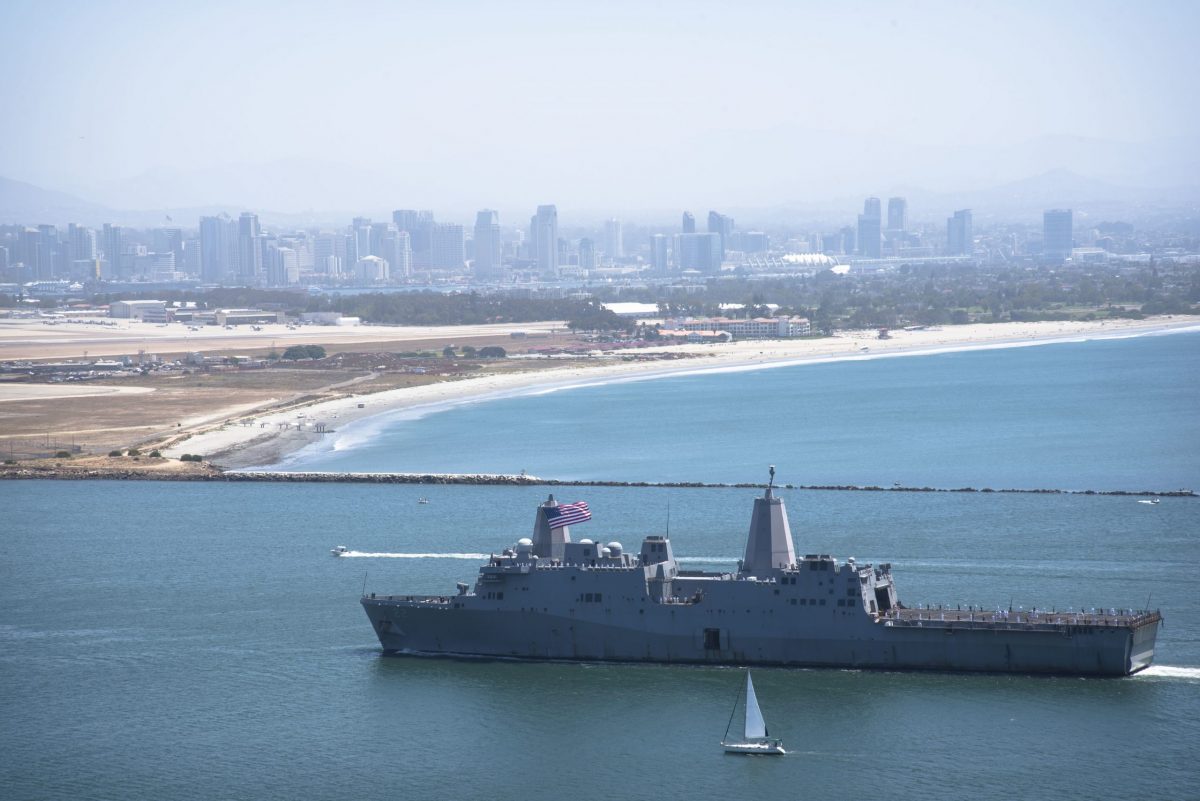 San Diego is a major strategic stronghold essential to the national security of the United States. It also makes it a preeminent military target for US geopolitical adversaries in China, Russia, Iran and North Korea, as well as non-state terrorist organizations.

We have previously written three articles detailing the merits of a second opening to San Diego Bay in order to greatly reduce this threat. These were written from the perspective of the U.S. Navy and national security, the environment, and regional economic potential.

Today we present a fourth position from the perspective of the potential impact on the deployment and sustainability of the United States Marine Corps, access to naval repair facilities, and the all-important logistics of sustaining the Navy and Marines.

The vulnerability issue of the Marine Corps deployment has gone largely unnoticed thus far, but it is of paramount importance.

For the first three decades of the 20th century, the Navy was content with Pearl Harbor as a forward operating base for part of the Pacific Fleet. This posture was sufficient until the rapid expansion of Imperial Japan in the 1930s. This expansion prompted the repositioning of the vast majority of the Pacific Fleet at Pearl Harbor, with its single entry and exit point.

By making this move, the vulnerability to the Pacific Fleet, amassed at Pearl Harbor, increased exponentially. And yet the Navy was reluctant to acknowledge this increase in vulnerability and continued to underestimate Japan’s ability to strike Hawaii in any meaningful way.

And we all know what happened shortly after, on December 7, 1941.

In 2022, the U.S. Navy and national security apparatus fail (or refuse) yet again to recognize another massive Pacific Fleet vulnerability – this time in San Diego. The current situation is eerily reminiscent of Pearl Harbor in the last century, especially given the rise of several powerful and potentially belligerent players as well as San Diego Bay having a single point of entry and exit.

This bottleneck makes San Diego a strategic target. The associated risk requires mitigation and a viable solution is a second opening.

If an aggressor succeeded in blocking the single entrance to San Diego Bay, the Navy would be significantly crippled, commercial shipping would be cut off, and America’s ability to project energy away from its shores would be greatly reduced.

A blocked bay exit would literally bottle up all naval assets at Naval Base San Diego, NAS North Island, and Point Loma Submarine Base, as well as associated naval repair facilities.

Repair facilities are a true force multiplier for any Navy, and lack of access to such facilities could cripple the US Navy in wartime.

Think about the time frame of the USS Yorktown in World War II between the damage it suffered during the Battle of the Coral Sea and the start of the Battle of Midway. Yorktown repairs that could have taken weeks or months on the West Coast only took 72 hours at Pearl Harbor.

If our navy and marines cannot get into battle, they are rendered useless. If they are in the fight and cannot be repaired or resupplied and reinforced to sustain the fight, they will lose.

We must also remember that the largest of the three United States Marine Corps Expeditionary Forces is massed in the area at Camp Pendleton, MCAS Miramar, MCAS Yuma, Marine Corps Air Ground Combat Center 29 Palms, and Marine Logistics Base Barstow. All of this personnel and equipment is to be deployed from the San Diego area.

While much of the rolling stock supporting a maritime expeditionary force deployment is accessible from the prepositioned ships currently deployed around the world, massive amounts of naval ground, air and logistics support have yet to arrive by road. and by rail to San Diego to be loaded on board. Navy amphibious and supply ships. Other California coastal ports would be available if San Diego Bay were compromised, but each has its own unique set of limitations, making them significantly less capable.

Consider the ramifications of a huge cruise ship or giant auto transporter sabotaged (or hit by hypersonic missiles) and sunk at the entrance to San Diego Bay.

All Navy ships in port – more than 50 are based here – will be unable to sail for long periods until the channel is cleared. Likewise, all ships and submarines stuck in the harbor will become static targets for follow-up missile strikes.

Navy ships at sea heading to San Diego for resupply or repair will suddenly have to reorient. The shipyards along the bay will be rendered useless. And the deployment of the largest Marine Corps expeditionary force in the world will be significantly impacted.

Concerns associated with this San Diego Bay bottleneck have been identified as significant national security risks since the first quarter of the 20th century, yet they continue to be ignored.

Due to much longer range weapons, there is a strategic urgency that did not exist before. Russia invaded Ukraine in Europe’s largest ground war since World War II; China is expanding into the South China Sea and eyeing Taiwan; Iran is waging proxy wars against Israel and elsewhere in the Middle East; North Korea tests and launches ICBMs over Sea of ​​Japan; and the currently unstoppable hypersonic missiles become the mainstay of the arsenals of potential enemies.

The risk to San Diego and the deployment of the Pacific Fleet and Marine Corps as well as the sustainability of our naval expeditionary forces is undeniable.

The integrity and viability of Naval Bases San Diego is not only of critical importance to America, but also to the entire free world. Think of the world without the US Navy and Marines fully operational and capable of projecting US military power to maintain peace. In no time, belligerents around the world could soon be on the move.

To put it bluntly, the security of San Diego and the Pacific Fleet is a global concern and must be protected at all costs.

One cannot continue to remain inactive while admiring the beauty of San Diego Bay. Single entry and exit is a vulnerability that invites attack. By removing this important temptation, we can maintain peace.

The time for a second opening on the bay of San Diego has arrived.

George Mullen is spearheading the second San Diego Bay Area project opening and is one of the directors of StudioRevolution.com in downtown San Diego. Patrick “Paddy” Gough is a retired Navy Colonel with multiple command and senior staff assignments at Camp Pendleton, MCAS Miramar, and MCAS Yuma. He is currently CEO of Poseidon Consulting LLC.