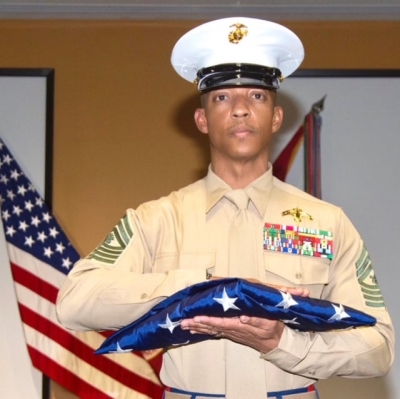 Today we spotlight another former graduate of the Class of 1988 from Ellerbe Wildcat and Richmond High School, Navy veteran Deryck Dervin.

Growing up with his grandparents Mrs Esther and Dr McLean, many of his men were in the army, including his uncle Thomas Harold McLean, also from Ellerbe, and he often saw soldiers patrolling the wood near his home. The impression these experiences made, coupled with his drive to succeed in difficult circumstances, but also to be different, led Dervin to pursue a career in the United States Marine Corps.

After graduating from RSHS, Dervin enlisted in the Marine Corps and completed basic training at Parris Island, South Carolina on February 1, 1989. His first assignment as a radio operator was at Okinawa, Japan.

His drive to do more persisted and he volunteered to serve with the 1st Air Naval Gunfire Liaison Company (ANGLICO) at Camp Pendleton, California. Dervin reported to the unit in July 1990 and left for his first Desert Storm/Shield deployment in October 1990 at the age of 20.

After successfully serving in this mission, Dervin still aspired to do more. He volunteered for another unit, the 2nd Force Reconnaissance Company at Camp LeJune, from 1993 to 2004, during which time he deployed to Afghanistan shortly after 9/11. In 2004, his service was recognized by Force Reconnaissance Team Leader of the Year.

At the end of this tour, Dervin was assigned as a senior enlisted member to a branch of a training group in Okinawa, Japan, to teach close combat, reconnaissance, and surveillance skills, in addition to combat skills. explosive breach. After two years of leadership in this mission, he returned to the field reconnaissance with the 1st Reconnaissance Battalion Camp Pendleton in 2007.

Shortly after, Dervin was selected to join a new unit with the Marine Corps, Marine Special Operations Command (MARSOC), in which he served for five years before being named the senior enlisted for the Marine Raider. Training Center. The Center, a school responsible for evaluating and selecting future Marines, as well as providing advanced courses for combat deployments and learning various languages.

He took many courses. Some of the most notable include:

During his career, he was deployed more than 14 times to several countries around the world, many of which were combat deployments, such as those in Kuwait, Afghanistan, Iraq and Africa.

He has received several awards, such as:

Although he currently resides in St. Augustine, Florida, Dervin will always call Ellerbe home. When his grandmother who raised him died, his childhood pals — including recent feature Ronald “Kenny” Durham, Doug McFayden and Jeff Dockery — who are more like family than friends served as carriers.

In addition to bringing attention to the incredible service career of this Ellerbe native today, we ask that you keep his family in your thoughts and prayers for his uncle, Thomas Harold McLean, who is ill. McLean, an Army veteran, was one of his inspirations to join the military. He attended Dervin’s graduation from Basic Airborne School and pinned him his first set of jump wings.

Join us today in celebrating Master Gunnery Sgt. Deryck Dervin’s dedication to our country, representing the community of Ellerbe in the most honorable way, and being such a commendable force in Black history in Richmond County!